INFORMATION & ADVICE FOR YOUR BASIN PURCHASE

Basins are used by everyone

While the kitchen is known as the hub of the home, there is no other room frequented as often, or by as many people, as the bathroom.

So designing such a commonly used room should be an afterthought.

One of the key features of any bathroom is the basin. It’s used by all and usually the first thing you see.

But which one to choose? There are a few things to consider when making a decision, such as, who’s going to be using it (and how often), the size of your room and the overall look you’re trying to achieve.

Most of these are available with a choice of either one or three tapholes, the latter using traditional basin taps, the former using a basin mixer. 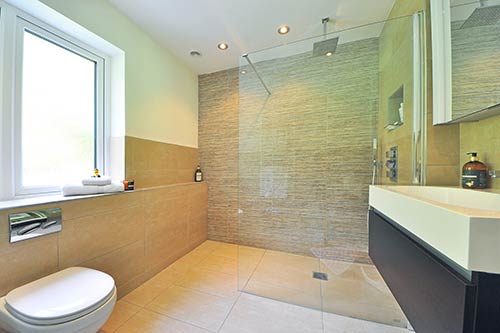 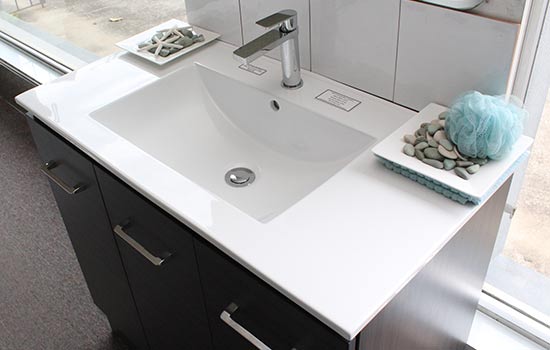 Probably the most commonly used basin, top mount basins sit primarily below the bench top, with the rim of the basin sitting visibly on top.

The rim can be thick or slim, depending on the style you’re after.

Top mount basins can be used with most benchtop materials, including timber and laminate. Water damage risk is eliminated by the basin itself covering the cut out.

The nature of the installation process means they’re less expensive to install in stone benchtops.

Due to the surface not being flush, water and spills can’t be wiped directly into the basin from the benchtop.

As the name suggests, an under mount basin sits underneath the benchtop, with the rim fixed to the benchtop’s underside, rather than sitting on top.

The flat surface creates a sleek and streamlined look. Under mount basins are also family friendly, allowing spills and excess water to be wiped directly from the bench into the sink.

Under mount basins generally can’t be installed into a laminate benchtop as it can’t be sealed well against excess water. They’re also more expensive than top mount basins. 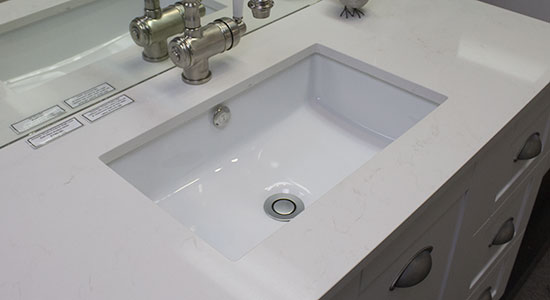 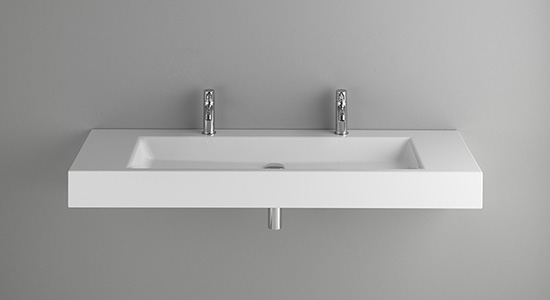 Wall mounted basins are fixed directly to the wall, without the need for a benchtop at all. The simple structure creates a modern, minimilist look.

Wall mounted basins don’t take up much room as they don’t have any cabinets below or around them.

In this case, the pro is also the con, as there is no storage space. Nor is there anywhere for excess water to go.

The Pedestal basin is similar to a wall mounted basin, except it sits on a pedestal in order to hide plumbing that can’t be concealed within the wall.

As with the wall mounted basin, the pedestal basin doesn’t take up much room, and is perfect for small spaces, or creating a classic look.

Again, lack of storage space or anywhere for water to go. They can also be a little tricky to clean. 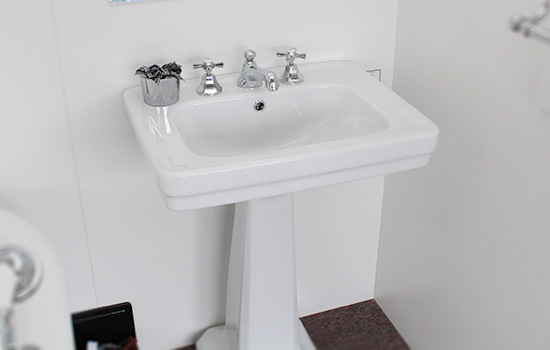 Modern and functional, a vessel basin generally sits on top of your benchtop, though some sit partially below.

While still being functional, vessel basins are a design feature, noticeable as soon as you enter the bathroom. Due to the size, they’re able to hold plenty of water and can be used in frequently used bathrooms.

As vessel basins sit above the bench, it’s important to consider the bench height to ensure the basin doesn’t end up too high. Conversely, setting the bench lower can result in less storage space. 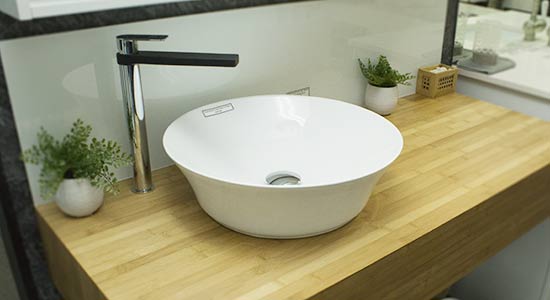 Basins can be made from a wide variety of different materials. Which one you choose depends on the style of basin you opt for, your budget and your personal preference.

Enamel over cast iron basins are one of the more popular options due to their durability. They can be manufactured into numerous shapes with lots of colours available. Although resistant to hot or cold objects, they can be damaged by sharp impacts.

Solid ceramic is another popular choice for the same reasons as above. These basins have the advantage of a reduced risk of surface damage, and therefore corrosion.